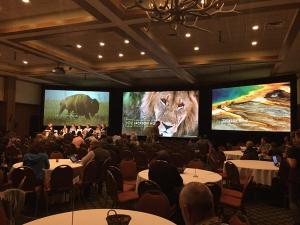 As I walked up the stairs in Jackson Lake Lodge to the lobby for the first time, my breath was taken away by the incredible view of the Teton mountain range through the 60-foot windows before me. And as if that wasn’t already enough, the murmurs from hotel guests about a grizzly bear outside eating an elk carcass confirmed to me that this was a place well suited to hosting America’s best known wildlife film festival.

This year’s festival was preceded by a conservation summit discussing elephant conservation, which featured awe-inspiring talks from speakers such as Cynthia Moss, Joyce Poole and Iain Douglas-Hamilton on their experiences with elephants, and their respective projects working to protect them. The “UWE 5” (Alice Marlow, Ida May Jones, Ben Morris-French, Nick Poole, Tom Richards) were tasked mostly with filming these keynote speeches, and so we were lucky enough to listen as these giants of the conservation world warned us of what needs to be done, not just in conservation but in filmmaking as well.

As the week progressed it was hard to distinguish between conservation summit and film festival, not least because so many of the big films had a conservation message. Racing Extinction was one in particular that I was excited about, and it didn’t disappoint – I don’t think there was anyone in the screening who wasn’t visibly moved by the film, and it deservedly won the Best Theatrical award at the Teton Awards Gala. The winner of the coveted Grand Teton was former Silverback Films producer James Reed with his film about the life of a Bajau hunter, and it didn’t disappoint: a compelling tale of a man’s relationship with the ocean with stunning underwater cinematography, Jago: A Life Underwater is truly an enchanting film.

After a week of filming, driving, setting things up, taking them down, meeting people and watching great films, the “UWE 5” were suitably shattered. But after being in such an inspirational place among so many passionate filmmakers, we’ll all go back to work with much renewed vigour and aspirations to make films like the ones we’ve seen in Jackson.

My name is Tom Richards and I am an aspiring wildlife filmmaker attempting to break into this most competitive of industries. A recent graduate of BSc Animal Behaviour at the University of Exeter, I have been inspired with a passion and desire to capture the beauty of the natural world through filmmaking and storytelling. View more posts